From Grass and Forage Science

Recently, there has been an increase in number of farmers in Brazil improving their pasture through the use of lime, ploughing, reseeding, and the application of P & K fertiliser.  Crops, such as soya bean or maize, are then grown for a couple of years before being under-sown and returned to pasture.  This process results in the loss of soil organic matter and soil carbon stocks.  The use of legumes could help to reverse this trend, but in Brazil the use of forage legumes has typically been low.  Initial varieties were susceptible to fungal disease but when resistant varieties were produced they did not persist in the sward.  The crown-forming legume Stylosanthes is dependent on natural reseeding.  It can suffer due to defoliation and damage by treading as the growth point is exposed in upper canopy and this can make it difficult for the plants to get to their reproductive stage.  This led to proportion of legume in the crop gradually declining over a number of years, and even disappearing. This legume could naturally reseed if there was a reduction in grazing before the period of flower formation and seed production.

Clonal legumes form stolons or rhizomes.  The growth point is near to the ground so they are less likely to be affected by the grazing animal.  However, careful management of light and sward height are needed to allow the legume to persist.  For the forage peanut (Arachis pintoi) grown with Marandua grass a pre-grazing canopy height of 24 – 30 cm and 15 cm at the end of grazing cycle is advised when rotationally grazing and a canopy height of 20 – 25 cm when using continuous grazing.  Using this type of sward showed a 28.7% increase in livestock daily live weight gain per hectare compared with N-fertilised grass-only pasture.  However, the seed harvesting process for the forage peanut is very laborious.

Tree legume species can be useful in silvopastoral systems.  Compared to maize cropping over the same time period (25 years), tree legumes can increase C in topsoil by 5-15 Mg C/ha although there may be a decrease in grass herbage accumulation and livestock performance.

The agriculture sector in Brazil contributes around one third of all GHG emissions in the country with majority of methane and nitrous oxide coming from beef and dairy cattle.  Evidence suggests that legumes can reduce the production of enteric methane through their effect on methanogenic archaea in the rumen.  Studies have shown that grazing animals on mixed pastures show reduced methane emissions compared to monocultures.  Similar nitrous oxide emissions have been measured from mixed pasture and grass-only pastures and emissions from bovine excreta are less on mixed swards than for grass-only with fertiliser N.

In conclusion, farmers could see benefits of using clonal legumes, such as the forage peanut, in a mixed sward with Marandu grass with target grazing heights dependent on whether the pastures are grazed rotationally or continuously.  Crown-forming legumes such as Stylosanthes could be grown for a couple years, so they would be suitable for integration with cropping.  Legumes may also mitigate against GHG emissions whilst maintaining milk and meat production. 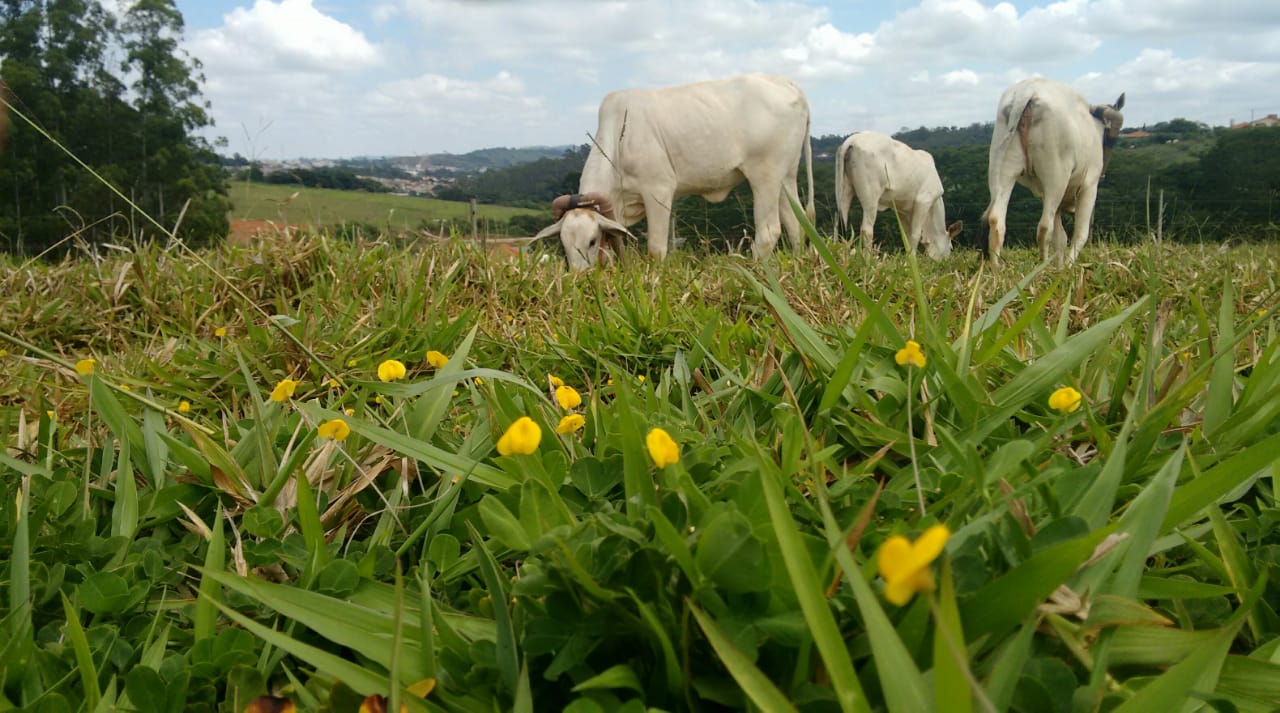 Zebu cattle grazing forage peanut (Arachis pintoi).  Taken at the University of Lavras in the State of Minas Gerais by Italo B.G. Lima.

Agrovista UK Limited is a leading supplier of agronomy advice, seed, crop protection products and precision farming services. Working in partnership with arable, forage, fruit, vegetable, horticultural and amenity sectors, Agrovista is committed to helping customers manage their businesses more efficiently and more profitably. We are dedicated to our company purpose - releasing agronomic potential. With roots originating more than 60 years ago, Agrovista offers a unique blend of local experience, research-based expertise, customer-based knowledge and trusted relationships; practising values of honesty, integrity and fairness across all aspects of the business. Agrovista also embraces care for the wider environment, with an understanding of the important role now played by all those who manage the land, through dedicated initiatives such as Agrovista Soil Health and Agrova Decision Support services.

Animax, the market leader in trace element supplementation for livestock. Best known for its Tracesure boluses with unique leaching technology for slow release of trace elements at a regulated rate. Cobalt, copper (if required), iodine and selenium are supplemented for 6 months. Much of the country’s grazed or conserved grass is deficient in these essential trace elements. Without supplementation, functions affected by deficiencies include immunity, energy metabolism, digestive enzymes, and breeding hormones. Sub-optimal function in any one of these is likely to have adverse effects on animal productivity and financial performance, so bolusing to help maximum use of forage is good business as well as an affordable and easy way to accurately control trace element intake to each animal.Twitter: @Animax_Vet
Visit the Animax website

Barenbrug UK Ltd is a grass seed producer supplying more than 4000 tonnes a year into the amenity and forage markets. As a plant breeder, it creates new grasses, legumes, and forage mixtures at 14 breeding and research stations worldwide, including in Northern Ireland since 1991, and trials them on farm. The company has a strong research focus and one of its research sites is at Cropvale in Worcestershire, where numerous species, varieties and mixtures have been tested since 2007.

LKAB Minerals supplies a range of easy-to-apply granulated products for the agricultural and horticultural sectors.  The Calcifert range is best known for its flagship granulated lime product, Calcifert Lime, a highly reactive and pure agricultural lime product, made using 100% British lime from the Peak District –  well-proven to effectively balance soil acidity and regulate pH in grassland and arable soils. Other products available include Calcifert Sulphur and Calcifert Mag, as well as high-specification products containing key trace elements, humates and bio-stimulants.  LKAB Minerals is an international industrial minerals group with a leading position in a number of product application.

CF Fertilisers UK are the sole British manufacturer of fertilisers, producing the market leading brand Nitram, best quality Nitrogen and Sulphur products SingleTop and DoubleTop and a full range of true granular NPKS compounds for all grass and forage situations.  Investment in research and advice to take science into practice is at the core of our business (click here). Our products are proven to provide the best nutrient uptake and have lower carbon footprints, accredited by the Carbon Trust.

DLF Seeds are a seed breeding and production company operating on a worldwide basis with grass and legume crops forming the core of the business. Other forage crops such as Fodder Beet, herbs and brassicas are also an important part of the portfolio.  The DLF trials farm at Didbrook in Gloucester tests and evaluates many species for adaptability to UK conditions and is an integral part of the UK testing system that produces the recommended lists of many crops.  Cover crops for soil health and fertility together with diverse species are all part of the DLF seed package.

Genus ABS is the world-leading provider of bovine genetics, reproduction services and technologies, marketing in over 70 countries around the globe.  In addition, Genus ABS provide a technologically advanced range of forage and udder care products.  Genus ABS is at the forefront of animal genetics and technology.  Through innovation and expertise we help to maximise the potential of dairy and beef farms to help them Profit from Genetic Progress.

Germinal are specialists in grass and forage seed, working at ground level to share knowledge and expertise with customers, distributors and partners across agriculture and amenity. Germinal is a privately owned firm that works closely with IBERS at Aberystwyth University, funding near-market work for forage grass, red and white clovers. Germinal also conducts extensive trials via its research facility. The majority of Germinal’s grass seed is produced in the UK via a network of contract growers. However, it also works with international seed breeders to offer a broad range of species (such as chicory, kale and maize) and varieties.
Twitter: @wearegerminal  @GerminalUKAgri
Visit the Germinal website

LIC UK specialises in dairy genetics sourced from its parent company in New Zealand. Sires are proven on commercial dairy farms worldwide, on both grazing and concentrate systems. The company is also involved in milk recording, business and grassland management, offering an AI service, farm consultancy and farm business software. Some 26% of annual income is spent on research and development each year. Through its Pasture to Profit network in the UK, it brings together like-minded dairy farmers to focus on growing and utilising more grass.

Limagrain is a plant breeder and supplier of seeds to both livestock and arable farmers. It offers a full range of grass and forage seeds through its LG, Sinclair McGill and LG Monarch brands. Limagrain invests more than £215m a year in research worldwide, with plant breeding stations and trial sites across the UK, including the LG Innovation site in Lincolnshire. Here long-term forage quality trials have been instrumental in creating the LG Animal Nutrition (LGAN) portfolio of grass mixtures. The LGAN accreditation is awarded to products that offer a combination of improved nutritional value and excellent agronomic qualities.

Nufarm is the UK’s leading manufacturer of grassland herbicides, insecticides and growth enhancers. Grassland is a core part of Nufarm’s business and we are proud to have weed control solutions for every grassland situation, including clover swards, reseeds, silage and grazing systems. Our herbicides are manufactured in the UK at our “state of the art” global production plant at Wyke in West Yorkshire and supported by a dedicated grassland technical team. The Nufarm range offers best return on investment to maximise profit from grass.

Volac International Limited is committed to helping farmers produce consistently better silage as a key part of maximising milk and meat production from homegrown forage. As well as its www.cuttoclamp.com six-step blueprint for better silage-making, the company provides regular, in-season silage-making advice, and conducts pioneering silage research. Silage preserved with its leading Ecosyl additive has been proven to result in improved dairy cow and beef animal performance, and the company markets a range of other additives, utilising the beneficial MTD/1 bacterium used in Ecosyl, for preserving a wide range of other forage crops.